The Future of RNode: A New Model

Over the course of the last six months, so much has happened with the entire ecosystem surrounding Reticulum, and a significant part of those improvements have come from the expansion of the RNode system. While it was originally designed as a singular open source hardware device, the recent work has opened up RNode as a general-purpose, portable, low-power and long-range digital radio transceiver, that can be easily created from a growing number of supported boards and components. 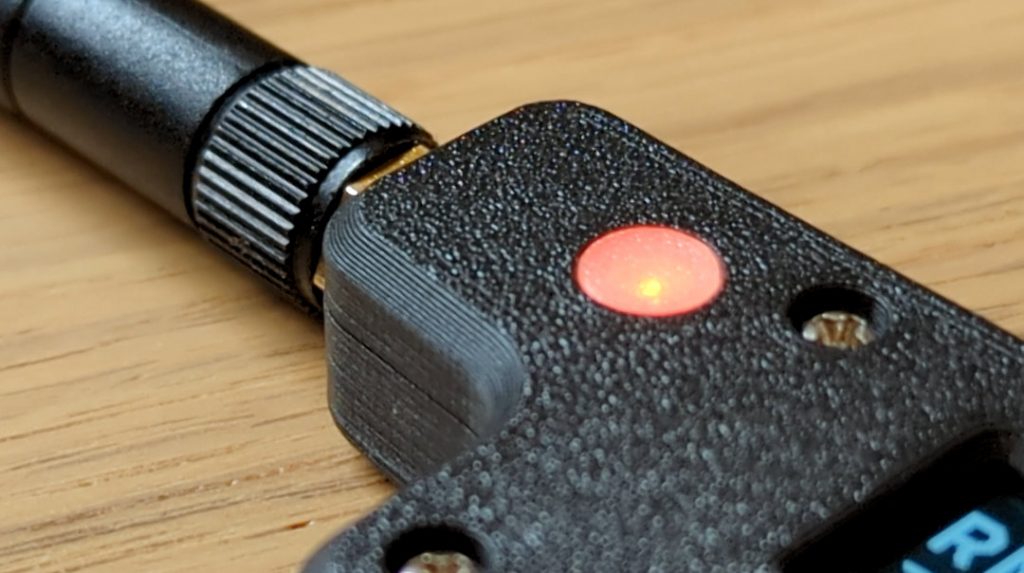 For RNode to be a truly useful platform, and ultimately a valuable tool in the hands of users, it needs to be as universally accessible as possible, and it needs to be able to adapt to a wide range of environments and situations.

Recently there has been a large uptick in interest in the RNode platform. People want to use the devices in a variety of different scenarios, either within the Reticulum ecosystem, or in other contexts. When I originally designed RNode, I decided to use extremely well-proven components, with a global production demand of many millions of units per year. My rationale was that RNode would exist on a very stable hardware foundation, and the supply of all necessary components would be ensured for many years. That rationale turned out to be slightly naive, in the shining light of hindsight.

Enter the unknown waters of global semiconductor supply collapse, and the original RNode hardware design became practically impossible to produce, since several key components are simply unavailable, and are not expected to ship until 2024. I've had to reserve the last small amount of component and completed unit stock I have on hand, for customers who absolutely need the original design due to integration constraints and similar situations.

Such a situation is completely unsustainable, and directly contrary to the goal of making RNodes widely accessible all over the world. To place the entire responsibility and availability of the platform in one place, and hinge the availability, of what is intended to be a general-purpose tool, on one manufacturer is just a fragile system. And if there is one thing we do not need any more of at this point in time, it is fragile systems with single points of failure.

There is really only one sustainable solution to that problem, and that is to create an easily-implementable platform for completely distributed and decentralized production of RNodes by anyone who wishes to do so, personally or commercially. So that is what I started working on.

This approach, on the other hand, also means completely giving up control over what I had planned to be the primary source of revenue for my work in this entire endeavor, which could be viewed as a bit of an unsettling proposition, especially for some hypothetical person that might have spent several thousand hours creating an ecosystem of tools and technologies.

I did, of course, have to do a bit of soul-searching to appreciate this decision, but as with many other things in life, the choice was probably already set out by myself long ago. At least, it is pretty clear from a personally detached perspective what the right decision is here.

RNode has always been a completely open platform. But until now, it has not been very easy to get started producing the units at any sort of scale, simply because it would require a lot of effort to bootstrap the process. It is a non-trivial time and resource investment to route and produce PCBs, source components, organise assembly, manage firmware flashing, testing, case design, and all the other tasks it requires to actually build and ship a working product. That meant that practically all RNodes produced came from my workshop. Going forward, that is going to change significantly.

For truly distributed production and distribution systems to be effective and to succeed, it needs to be both easy and low-cost to get started producing units, even at very low volumes. This lower risk and startup cost to practically zero, which means the barrier to entry is effectively removed. It also has the potential to create a very resilient global production system for RNodes.

That is why there is not really such a thing as The New RNode. The new RNodes will be the ones that all kinds of different entities and individuals will produce, sell, distribute, trade and deploy. This is all made possible by the new v2.x branch of the RNode Firmware, and the related build and deployment tools. The primary development focus of this new branch of the RNode Firmware is to widen hardware support to many different kinds of transceiver chips (SX1262, SX1280 at first, nRF chips and more later), and many kinds of development boards, while also making it very easy to design and build RNodes based on completely custom PCB designs.

I will still be producing and selling my own particular flavor of RNodes in a limited quantity, but I will focus my effort towards providing support and help for those wanting to build and distribute the hardware, and most importantly of all, I will focus on developing and maintaining the firmware and software ecosystem, and to make sure the necessary tools are kept sharp and available. From a utilitarian perspective, I think this is the very best way to make use of everyone's time and efforts.

To provide an example of the kinds of RNodes you can easily build using the RNode Firmware v2.x platform, here is a prototype of the RNode I will be offering soon: 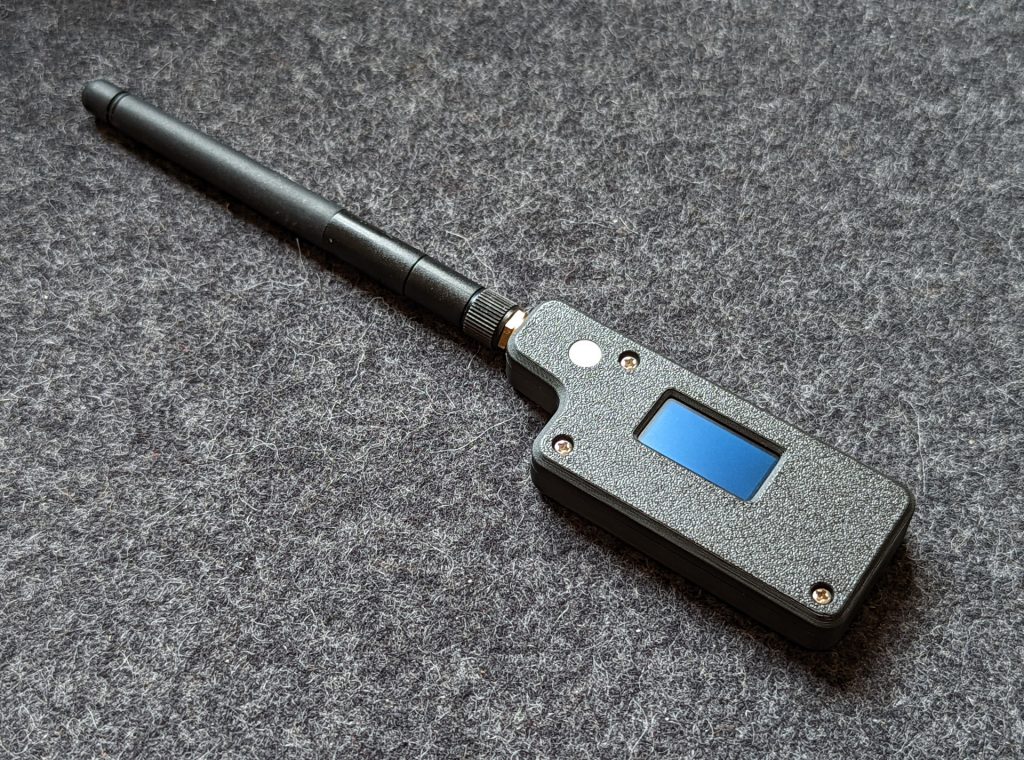 This particular device uses a modified LoRa development board, plus a few extra components, all neatly fitted in a 3D-printed case. I'd like to highlight some of the new things that are possible with devices like this, that run the v2.x firmware:

The new firmware follows a modular approach lots of different hardware can be supported, dynamically detected and activated. Not all features will be implemented and available at the initial v2.0 release. I will prioritize getting a stable and functional version out there first, and add the more advanced features incrementally. Most likely the LXMF, μRNS and repeater functionality will be left out initially, and obviously not all transceiver ICs will be supported initially, but will be added according to demand.

The v1.x branch will remain available and usable forever, and all tools and software will continue to support RNodes based on it. It is also important to note here that v1.x and v2.x based RNodes will be completely interoperable. The goal is to create a completely interoperable ecosystem where devices from different manufacturers can all communicate with each other. The v2.x firmware line is the key to that, and I am really, really looking forward to getting it into your hands. I think this will be a really useful step forward in the continued evolution of the ecosystem.

The v1.x firmware line has always been completely free, both in terms of cost and freedom of use and modifications. In this spirit, the v2.x line will remain so for all personal, educational and non-profit purposes. Anyone will be able to create their own v2 RNodes, with full functionality and no limitations. For commercial use, for example if you build and sell RNodes, or use RNodes in a profit-generating setting, I will charge a small per-device fee for the firmware.

I have decided not to rely on limitations and crippleware to enforce this. In fact, there will be no enforcing, apart from a simple message to users. I will instead trust you all to do the right thing here. This also means that I will never become a single point of failure in the ecosystem, and should I disappear, RNodes will not. So if you really, actually, need to steal the firmware for some purpose that you deem important enough, and profit from it without sharing some of that back to the community, that choice is open for you to make.

Buying the firmware from me will come with a lot of valuable perks though, such as access to CAD design files and STLs for cases, PCB assembly and manufacturing contacts, plus support, help and cooperation from me in your projects. Buying the firmware from me also means I will add you to the official list of suppliers if you want this, and include official support and recognition for your devices in all related tools and programs.

Choosing to do things this way has been a leap of faith, but I believe it will work out for the benefit of everyone, and hopefully help the entire ecosystem, and all of us to prosper.

While I am working as efficiently on preparing all of this as I possibly can, it will still be a little while before everything is ready. If you already know that you want to participate in this endeavor, either by building or distributing RNodes, please get in touch with me over LXMF at the address: